Home Flirting The Art of Flirting Over Text
Flirting

The Art of Flirting Over Text 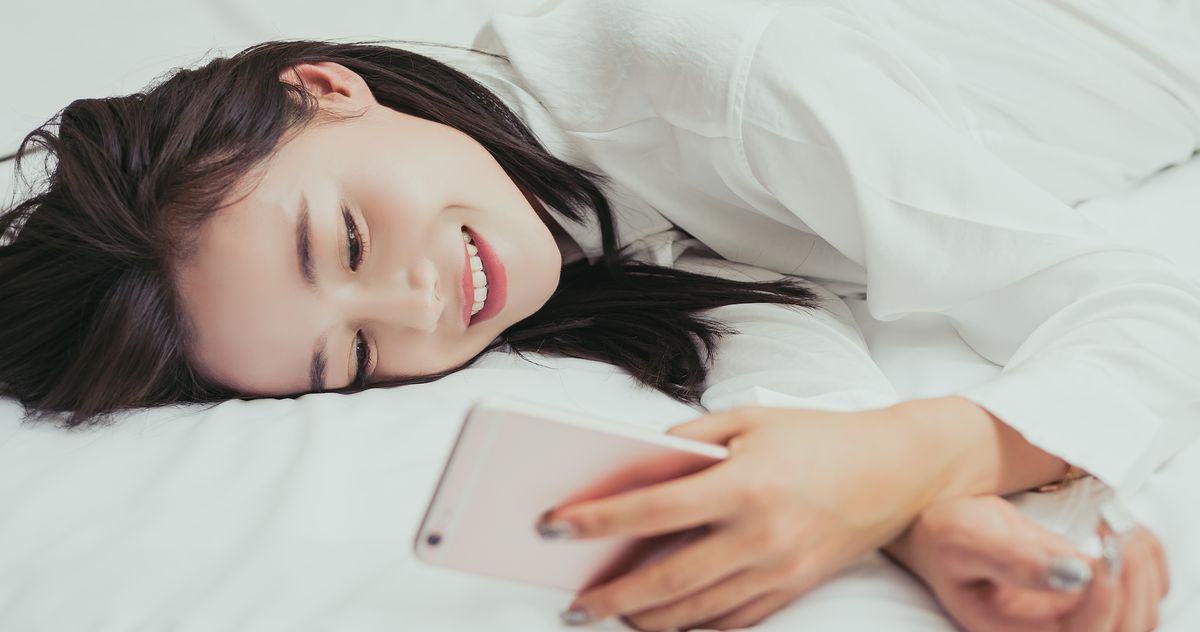 For many who came of age at the dawn of instant messaging, text-based flirting might come more naturally than face-to-face conversation. But even for those of us who have been doing this since our early teens, texting can still feel like a fickle mating dance, one where a wrongly interpreted emoji can be a source of grief and confusion.

The truth is that both the fun and the stress of texting (and sexting) come from the same thing: It’s uncertainty, the thrill of not quite knowing how seriously to take your flirting partner, the fun of implying “maybe” or “I might” without making promises. But, really, flirting is just a conversation — a warm, funny, and ostensibly enjoyable one. With that in mind, we’ve curated some advice on flirty texting. Try it out with your crush or as a titillating pregame to your Zoom date, or test it out with your partner as they sweat over their sourdough starter in the next room.

Work on your Opener

Don’t be lazy. Unless you want to fill your partner with dread, a lone “hey” or “hi” are undesirable openers; likewise “what’s up” and “you up?” are even less appetizing. These are lazy and careless initiators: They leave the onus of a conversational response on your partner, which they have every right not to give.

Set the tone. In these trying times, it may be your instinct to hide your frisky intentions behind the veneer of concerned check-in. Seeing how the other person is coping is a thoughtful way of starting a conversation, but opening with pandemic-speak really doesn’t really set the correct vibe for what is meant to be a light, pleasant, or sexy exchange.

Instead, open with something thoughtful or playful, try a “this reminded me of you” and send a song or a photo. Or, if you have history with the person, you can hit them with a “remember this?” and send a photo of something you did or saw together, or an inside joke. The point is to let the person know you’re thinking of them, and value them enough to write a warm message that is specifically for them. It makes the receiver feel special, and making people feel special is a key tenant of a good flirt.

It really does go down in the DM. Another option is responding to an Instagram story — it’s an easy starter and the conversation can live on DM, which is a less formal space than your iMessage, and hitting a casual note is important to crafting the free and easy tone that is the basis of a flirtation. Keep in mind that flirtation is not a goal-oriented activity, this makes Instagram — a time-sucking app, with its memes and silly filters and vacation pictures — a sort of perfect place to flirt. The other benefit of Instagram is that if you do end up sending photos, the camera and filters are more flattering on Insta than your iPhone’s. I won’t get into details, but this strategy once got me a DM back from the rapper YG, a proud moment in my time as an erstwhile flirt.

To nude, or not to nude. Speaking of photos, don’t be afraid to open with one. We’re dealing with the art of language here, but sending a photo — a nude, or a nice selfie — isn’t breaking the rules, especially if you’re comfortable with the person or want to make a strong impression. Sending it with a playful note — a miss you, miss me?, see you later, something in that vein — will make the message feel more intentional, and will help you feel more comfortable sending it in the first place. That said, there’s merit in sending a photo that you simply let speak for itself. Be sure that the person wants to receive it though; an unsolicited nude can be a bad experience.

Ask a genuine question. Asking relevant questions is conversation 101. Questions show that you’re interested in what this person has to say and that makes them feel good.

You can start with a courteous how are things? how are you?, but that’s always a bit boring, and can send the person into a panic if things are, in fact, not good. Otherwise, try soliciting a recommendation, something that also indicates you also trust this person’s opinion. This is an especially good approach if they have an area of interest which they like to talk about, like literature or wine or anime.

It’s also easy to go from here: once they answer you can either offer some recommendations of your own, or move into more interesting territory à la: We should make Bolognese together some time, or, oh my God, you haven’t seen Return of the King? We have to watch it together.

“What do you think of this?” [send a picture of a lacy, sexy something]

“What are we going to do once we get out of here?”

“What would we be doing if we were together right now?”

And its hornier cousin: “What would you be doing to me if we were together right now?”

To emoji or not to emoji

The matter of whether or not to use emojis or not in your flirty texts is one of great debate even among Cut writers. We created a definitive emoji-sexting glossary several years back in an attempt to illuminate the smuttier meanings behind certain fruits and vegetables; soon after, another writer wrote 800 convincing words on how “sexting is fundamentally unsexy” and can lead to a total breakdown of communication.

Pros. For some, emojis are affirming and necessary, and can be fun, adding color and zest to a conversation. Take the woman from this story who was sexting an artist: “he was great at using the emojis to create dirty images. Emojis like: eggplant + doughnut = splash; bananas, cherries, and lots of finger signs into a doughnut.” For those who are artistically inclined, communicating via these kinds of modern hieroglyphics adds a layer of fun to your text banter, especially if you’re into creative types.

Cons. Leaning on emoji symbology if your partner is not well-versed in them might increase your chances of being misunderstood. What’s more, sending may surprise and delight some, but it could come off as corny or even aggressive for people who don’t tend to use emojis.

Overall, the use of emoji is extremely subjective, and depends on the dynamic you have with the person you’re texting with. You should take cues from them — an older partner might not understand what you’re going for with an eggplant and donut emoji. A younger one might think you’re being ham-handed or dorky.

There’s a time and place for dirty language, and sometimes it can be hot. Oftentimes, though, it can be jarring and a turn off, especially if one of you has different perceptions of vulgarity. It can also be weird as hell, like this sext: “I want to stick my hard rod into your wet pond!” which seemed to be an earnest expression of passion, but led to the end of one woman’s dalliance with an older man.

“It was powerful,” she explains. “It affirmed how small prompts can elicit a physical response … It’s also fun to avoid the expected filthy language. Effective sexting ought to stir something inside you, like a steamy novella or film.”

On the double- and triple-text. Oh no! The conversation has faltered and died. Do you double-text? Wait a day? Give up?

The etiquette around texting is as frustrating and esoteric as any, but it is, unfortunately, very real. Double-texting in general is fine, but if the person is no longer responding, three unanswered texts in a row can be excessive. I implore you, though, do not waste your time overanalyzing this; perhaps your crush is no longer interested, or they’re simply preoccupied with something else and flirting with you has taken a back seat.

But don’t let the conversation die on the vine. You also need to hold up your end of the exchange — responding with one word or very brief replies isn’t compelling, nor does it invite banter; just like in real life, you should contribute to the conversation. If you feel like things are faltering, consider introducing a new topic by asking a question or sending something (an article, photo, or video) to steer the conversation in a new direction.

On misinterpretation. And just like in real life, there will be instances where things are misunderstood or misinterpreted. This is normal; naturally, it’s harder to convey tone and emotion over text, and you don’t have all of the usual indicators at your disposal (e.g., body language, facial expressions, etc.). But instead of letting the conversation die on the vine, clarify what you meant or ask for clarification. iMessage even has a handy “?” reaction function. Utilize this! If your flirting is going well, misinterpretation shouldn’t kill the conversation.

Well, that was weird. Likewise, the other person could send you something that feels corny or weird to you, or something that kills the vibe. If you’re seriously turned off or freaked out, you don’t have to respond. That said, if you’re not ready to give up on them, you can change the subject. One of the openers above (asking a question, sending a song or photo, etc.) can help to gently steer the conversation back to flirting. Waiting a while to respond, too, will make a change of subject feel less jarring.

Ending the conversation. Lastly, assuming you don’t want it to move to full on sexting, how might you end a convo? Again, that’s the beauty of text-based flirting! You can simply stop replying! Or, if you want to keep things courteously open-ended, you can tell them you must go now, but that you’ll text them later, or look forward to hearing from them.

Advice from the French. Because you’re texting, there’s no pressure to respond immediately (in fact, a bit of lag time between messages keeps things interesting; delayed gratification is a powerful tool in flirting). What’s more, this time can give you a moment to think about where you want to steer the conversation; if you want things to be less PG, more serious, or if you even want to skip the digital dalliance and move straight to the phone.

But the most important part of flirting is that you enjoy it. It’s easy to get in your head about these things, which sucks the joy out of it. And if that happens, I’d like to point you to this excerpt from Toril Moi’s study on Simone de Beauvoir, which I think perfectly describes the nature and objective of flirting:

Flirtation … is based on ambiguity: It is a game in which one does not declare one’s hand … In this sense, flirtation is not a goal-oriented activity … The point of the game is to make all participants feel good: You make me feel attractive, I make you feel desirable, I brighten your day, you brighten mine.”

This Is What Couples Therapy Can Actually Solve

What Does It Mean When a Guy Flirts...